The lead “Rising Tide” iconic was very well received in many instances in the press after the image release. On social media, reactions and curiosity about the image and the show were raised to fever pitch leading to an all time high in the BBC’s viewing ratings for the seasons opening episode capturing over 8 million viewers on New Years Day, the total after the inclusion of online viewing figures from the BBC’s iplayer increased further topping all other festive programming.

We began talking with BBC creatives regarding their plans for the Sherlock Season 4 campaign a month or so in advance of shooting. At the first meeting we were given an introduction to the show in general, a brief outline of the season’s narrative, and some of the plans for the campaign. A lot of the visual direction for the concept and composition had already been worked out with sketches from the creative director Nick Meikle and art director Martin Duhovic. After an overview of the deck we began to consider options on how we may achieve the technical aspects involved alongside starting our own research with the content of previous seasons to get a flavour of Sherlock to date.

We had the luxury of being consulted early on one of the most ambitious and complex campaign shots to date for the show and became increasingly excited about how we would realise the image. Complex, because we needed to shoot on the actual set for added authenticity which came with the problem of its inability to be flooded, a problem because water covered a large percentage of the image visual presented from the BBC in their concept sketch, therefore we needed a creative solution for the illusion of water in the location.

Water is a notoriously difficult element to simulate convincingly, the problem and its development to create the believable illusion of water has been ongoing in the vfx industry throughout the years in various hollywood releases making leaps and bounds in pioneering technology and creative thinking for the various circumstances and ambitions for its use in motion pictures. Some of the problems involved with the creation of convincing water are the reflective qualities, translucency and refractive characteristics. These characteristics in our circumstance would all some how have to be convincingly simulated inside a set with talent character poses that needed to be shot flexibly for final sign off and minimise the post production on any unforeseen changes in requirement, changes in character poses and matching the reflections of possible new poses and facial expressions would have to be covered off. This, alongside creating the illusion of floating and semi submerged objects from the set in the water which did not yet exist.

In our favour we had some time to plan, however knowing it was primarily a still image with huge resolution requirements from the BBC on large wall deliverables, many times the size of a standard billboards and viewed in more of a gallery environment as opposed to a passing glance roadside as many billboards are seen, it was not without its challenges in how we went about solving the creative with the convincing realism required. The working resolutions of this kind of file would have to be in excess of four times the size that hollywood would typically be working at and over twice the size of typical billboard print resolutions. A still of this nature would be seen way longer than any still frame of a moving hollywood feature and scrutinised more intently than any billboard. This resolution requirement put some added pressure on the cgi aspect, going above and beyond the usual resolution outputs of this software and the comfort zone of many of its skilled software operators, a task that was not to be taken lightly with a medium as complex as water.

Good planning is a key aspect to pulling off these types of illusions, particularly true in this scenario. The environment and its characters would not only need to be shot on the highest resolution capture available, but it would need to be a tiled shoot to capture all the environment needed from the set to cover off the different formats required for the final image usage and avoid the lens distortion issues associated with shooting in this type of environment. The chosen method would retain as much native capture detail as possible, giving the best possible quality for the high resolution deliverables. We decided on a combination of in camera captures alongside a cgi assist for the water creation, the early involvement allowed us to fully advise and plan exactly how the Sherlock lead iconic could be realised and maximise on the efficiency and realism of the post production.

For us after some careful consideration in our early discussions with the BBC, due to the psychological aspect of the seasons content and the heavy symbolism wanted by the BBC for the iconic, the aesthetic tone needed led us directly towards the work of one of the most highly regarded photographic influencers within the industry still working today, Gregory Crewdson. This idea resonated strongly with the BBC creatives too, enabling us to fully play out the waters symbolism representing the rising darkness engulfing our two main characters of Sherlock and Watson in the new season, our hopes would be to leave the viewer encapsulated with the beauty of the moment, yet left with a taste of the inner unknown darker realm within the narrative, creating a fascination to surround the interest of the as yet untold story.

Much of the content of the planned image contained many elements shot in Gregory’s past creations, some of the visual tools we would borrow from Gregory’s language in constructing the image however had never appeared together in his own work, that for us made something of a fresh tribute to how we could include his inspiration for a new audience. Incorporating the aesthetic of Crewdson’s work was a strong initial direction we felt would work on seeing the first sketches presented by the BBC, many of the underlying narratives and emotive juxtapositions that appear in Crewdson’s work could be served up marrying perfectly with our needs on the image’s communication for the season’s opening episode in the lead up to its release. This was an easy sell with our chosen photographer Todd Antony who was not only a fan of Crewdson’s beautiful creations as are many within the industry, but a photographer we felt fully understood his work and could pull off the technical requirements needed for shooting the project.

It was a hectic shoot as we not only needed to capture off the requirements of the lead “Rising Tide” iconic but also due to the actors schedules and media usage plans, the photography for a second Iconic in the campaign ( “Destruction” ) had to be shot alongside many individual character shots for some of the lead ups to the episode releases in the TV campaign. As we had expected Todd Antony and his team of assistants were a fantastic choice ( which to be honest was a huge ask ) and gave us some great native captures for the project during the course of the two days we had available.

The actors, set managers, the BBC and our team put in tremendous efforts together in getting the elements required for this ambitious undertaking in the tight timeline we had available, the remaining work of creating and piecing together all the final components now lay firmly on our doorstep.

Combining photography with cgi is not without its problems aside from creating and matching environment lighting the process of joining the two worlds photographically seamlessly is something we have plenty of experience with, so the methodology and complexity of such a proposition had been well understood. The route we chose allowed for the projection of the photographic captures to be added in an environment created in cgi, the cgi environment would be built primarily for the creation of the water element to optimise the timeline involved in the cgi process. This method allowed for some back and forth transition within the progression of the 2d post production mid process of the cgi. We knew ahead of time additional work would be required in 2d post in order to give us the flexibility and realism we required in creating different variables in refraction qualities of the water using the 2d elements. Additionally work on the environment area’s and the character talent area’s that needed damp and water effects added to the dry elements shot, then completing the retouching on the overall photographic plates before rendering in cgi, so the reflections and post production changes could be matched in the final cgi reflection renders of the water creation to complete much of the illusion with the most efficiency.

Tests were initially done within the cgi scene to check the exact positionals of details such as caustics in the environment that we wanted to introduce from the play of light on the water that was being created. The caustics were then created within 2d using additional photographic elements, mapping them in to various planes of the environment where relevant and aesthetically where we felt would benefit the image, without straying to far from reality.

The water illusion was then finalised in 2d with a recipe combination of passes from cgi and 2d photographic captures of the reflective materials used on set.

Lastly some of the objects we chose from the set on the shoot and captured were added in to the water to increase interest within the image narration details and to further harmonise the two environments of cgi and photography.

Throughout the compositing stages a final grade was developed to add to the emotional engagement of the scene and further align the image with the original discussions on the tone of the aesthetic. 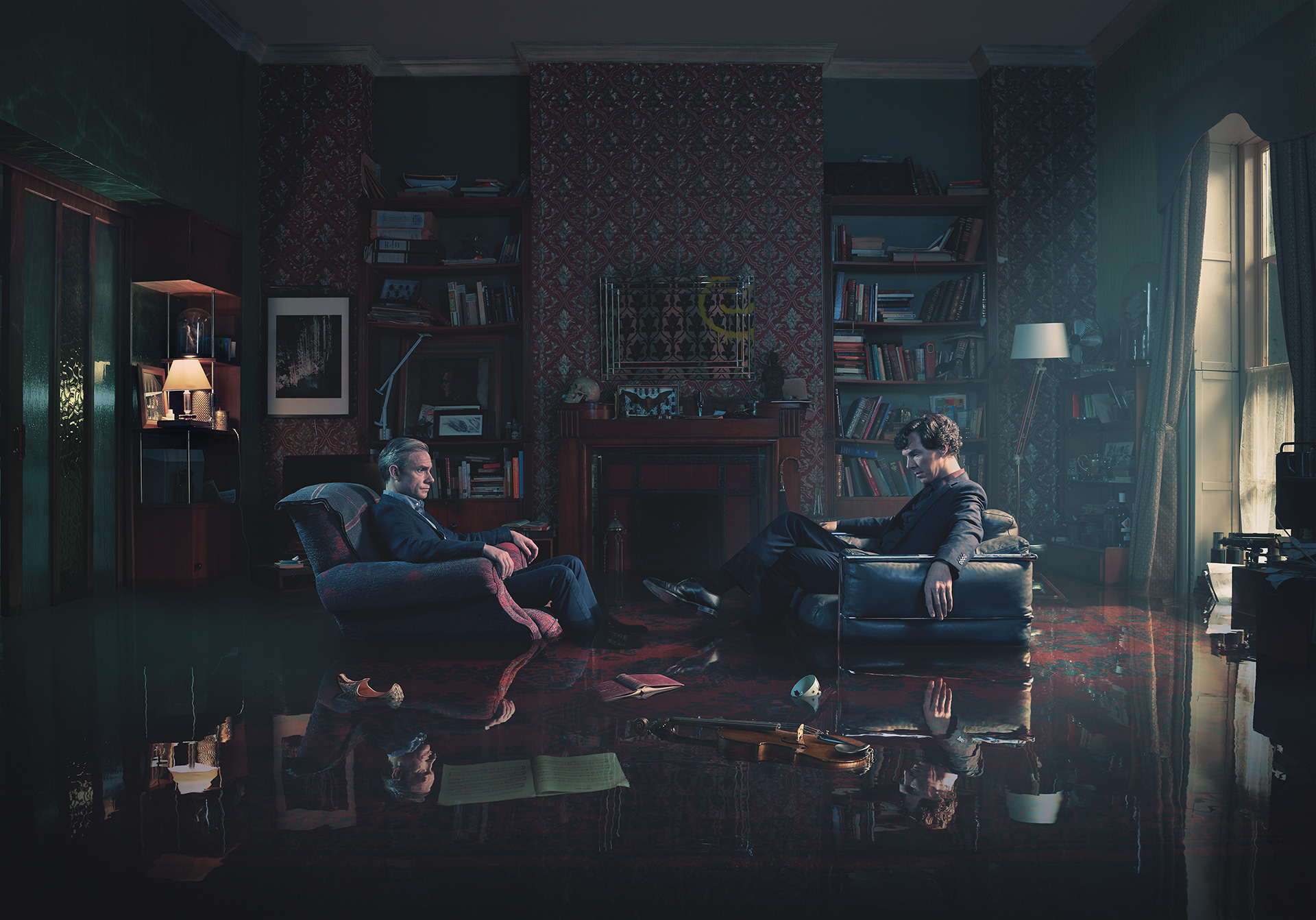 To see how the final visual was composited view the below breakdown to the post production process. One of the two parallax motion trailers follow, produced in collaboration with BBC Worldwide from our still images. The parallax motion teaser trailers were used by the BBC in the tv spots leading up to each episodes airtime, alongside taking over some of London’s Piccadilly billboard real estate.

It's not a game anymore… #Sherlock

Posted by Sherlock on Wednesday, November 30, 2016

The still of “Rising Tide” was later used in the cinematic release posters, alongside the “Destruction” Iconic with the dvd, blu-ray and cd materials for the season. 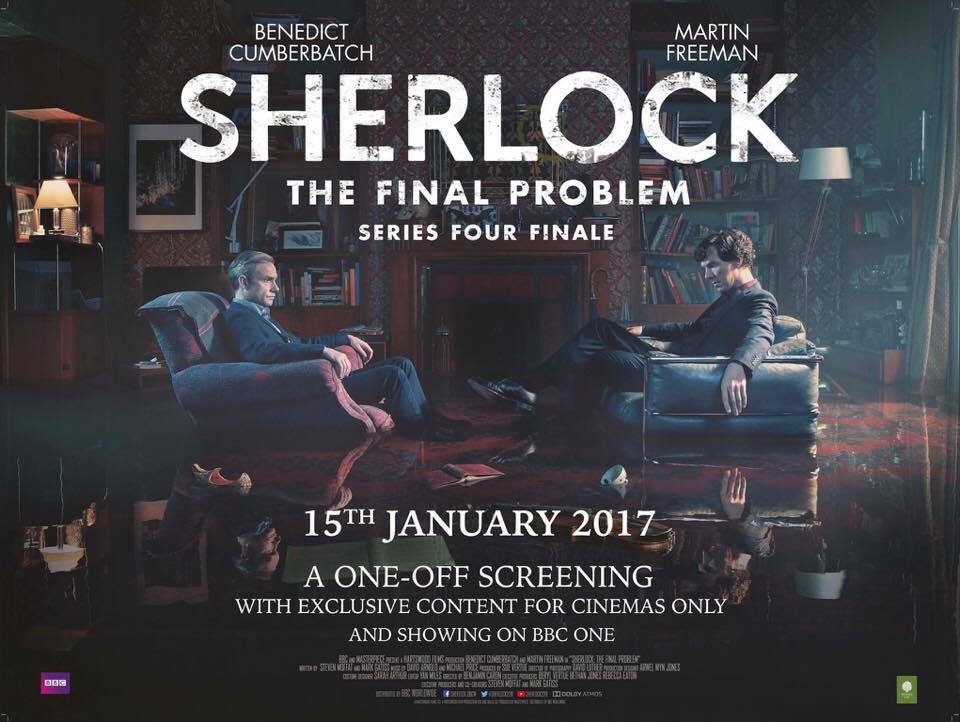 Some press links of reactions from the image release:

More from this project can be found on our social media channels.